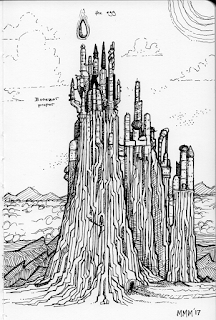 I got distracted a bit, and so this is what I have been working on...

There is a megadungeon beneath the Magic City of Booezor that stretches down through the Sculpted Mountain and deep into the earth below.  It is unknown for how many levels the structure continues underground, but there are six entry points and each is a dungeon of its own: a giant magnetic termite mound, the sewer system, the tomb of the mountain's heart, the magically accelerated dumping grounds, the moonmetal mine, and the partially physical prison space the Labrynthyne.

Booezor is divided into eight "tiers", the first three are accessible to anyone (like 1st level PCs), while the other five are unlocked by amassing wealth or otherwise raising your social station:


The Weave, a hanging shantytown and scattered caves hung from the side of the sculpted mountain, difficult to get to, many entrances exist not considered part of the city proper.


Bottomshelf / Beastmile, lower cliff villages each with their own name, difficult to get to, many entrances exist, not considered part of the city proper, and the city's external animal market, a town in itself.


Secondmarket / Cindiband, the higher classed and more specialized markets and shops are here, the residences higher, the entertainment more elaborate.


Precious Pillars, the highest and most improbable towers belong to the most venerable Children, unaligned magi, and the ultra-rich (1%).


The Egg, a permanent physical extrusion, made of pure magic, of a vast extradimensional space that serves as the campus of the Children. Truly there is a palace within the space the Egg describes.

So I need to continue to work on Booezor enough to comfortably run it without getting completely carried away.  A bunch of boring work is done, tentative tables of item, armor, and weapon prices and which tiers of the city they are available in.  Started a table for animal prices.  Got an easy d100 table of types of buildings in the city.  And I am waist deep in a d100 table of city rumors and another of specific NPCs, which are super cool.  Oh, and this fun motivation table:


d20 Reasons to Seek the Depths


1 you seek an ancestor's spirit trapped within a soul crystal you will know by touch, such crystals were popular in ages past, and are found in the deeper areas.


2 you seek to confront a specific powerful undead creature, whom you have a (personal) connection to, and who lairs in the deepest depths.


3 you seek the water at the source of the Haelix, one of the twin rivers that flow beneath the city, whose current flows in an upward spiral.


4 you seek the land of the subterranean sea fed by the mouth of the Xeeres, one of the twin rivers that flow beneath the city, whose current flows in a downward spiral.


5 you seek to recapture seven unbound demons, who have installed themselves as lords of the deeper dungeon.


6 you seek access to the insane civilizations and beings of the 'Veins of the Earth', which can be found through the lowest levels of the megadungeon.


7 you seek to purge the various “cancers” of the depths, clearing held and wild areas in the name of Tyrant or Immacula.


8 you seek the “fortune” you feared to seek till now, the ambiguous prediction that your fate would be found in the depths.


9 you seek ancient magic secrets of the Shem, who first raised Booezor as a hive countless ages ago.


10 you seek the unplundered riches of the deepest depths, it's the only way to finance your impossible dream.


11 you seek one of the missing pieces of the sky for capricious Se’vensaera, broken and hidden ages ago deep beneath the earth.


12 you seek the Inverted Throne that is rumored to sit at the lowest point of the megadungeon, anyone who sits upon it will be made a great ruler.


13 you seek the prize of a noble Treasure Hunt, the mad singular desire of those who need never try for themselves.


14 you seek the archancient technological secrets of the Tenzoril, many believe the deeper megadungeon to be one of their creations.


15 you seek a stable gate to other worlds hidden in the lowest levels of the megadungeon.


16 you seek to consume the heart of a Dragon of the Source, one of which sleeps far beneath the city.


17 you seek the valuable secrets of the megadungeon's structure, inhabitants, and layout to sell, share, or hoard.


18 you seek the truth of your hazy past, and bizarre recurring dreams you are sure point deep below the city.


19 you seek an audience with the Naudde, the Goddess of Mysteries herself, you will find her avatar beyond many labyrinths, deep underground.


20 you seek to delve deeper than has any other, you seek fame and singularity, immortality in legend and influence.

Back soon with those tasty d100 rumor and npc tables... or something, you never know.
Posted by Orobolus at 10:07 PM No comments: