The second of six encounter tables for the Foabeléth Ordirrex, the megadungeon beneath Booezor.  Following will be the dump, the Labrynthyne, the moonmetal mine, and the giant termite mound.
-+-

Tomb of the Mountain Heart 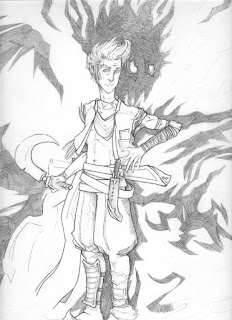 4. Flesh Caddiss – giant worm that severs limbs and incorporates them into its horrific still-functional “shell”.
5. Mummified Animal – usually small preserved pet type creatures, occassionally larger guardian animals or beasts of burden.
6. The Masked Mournful – cult-like devotees of the death goddess Ris, protective of the catacombs and the endless dead.
7. Shadow – having devoured their owners they seek to feed themselves with the warmth of others.
8. Tomb Mold – immobile blue-gray mold with highly dangerous spores, sunlight will halt its growth but not kill it.
9. Ghouls – debased and deformed cannibals twisted into something like undeath, there are rumors of a ghoulish kingdom deep underground.
10. Ancestor Spirit – seek to connect/combine with their descendants, if you are unrelated they will low-level geaes your assistance.

16. Delver Group – a party of NPCs from the Delvers' Collective, going to or coming from a mission in the depths.
17. Bone Golem – often built in the form of a multi-armed man or a spider, these golems can repair themselves given time and enough bones.
18. Gobboos (1d4)
1. Kobalds – hyperactive.
2. Gobs – immunities.
3. Hobgobs – smartest.
4. Gorks – strong.

1. Dust Skeleton – shatter into fine particulate, irritating and damaging to the lungs and eyes.
2. Shard Skeleton – explode into sharp pieces when destroyed.
3. Reassembling Skeleton – reforms with full HP several seconds after being destroyed, always have a weak point.
4. Fossilized Skeleton – bones made of stone, harder and heavier than normal.
5. Plated Skeleton – with fused armor pieces.
6. Skeleton Champion – mighty skeletal warrior.
7. Skeleton Mage – combat-focused skeletal magic user.
8. Skeleton Priest – adherent of Ris, entropy, death, destruction and cold spheres.
9. Burning Skeleton – lit from within the pelvis, ribcage, or skull with magical (cold)fire.
10. Beast Skeleton – remains of a great beast.
22. Death Fog – deadly or blood-draining miasmic tomb stench become independent mobile entity.
23. Whisperer - resembles a bipedal, wingless, bat about five feet tall, with the v-shaped chests and long forelimbs of a bat, but clawed hands, two of the fingers are rigid and end in large hooked claws, useful in climbing, it is intelligent and can mimic most voices and animal sounds, but is bad at creative improvisation.
24. Spiders (1d4) 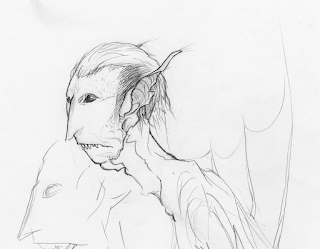