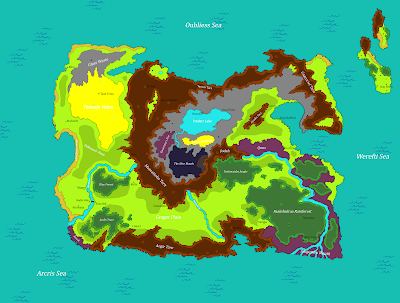 Posted by Orobolus at 6:42 PM No comments:

This is the fourth entry in my Booezorian megadungeon series, you can find the earlier posts here:
Structure of the City and Reasons to Seek the Depths
Starting Character Rules
Booezor Rumors Table and Basic Factions

Here are one hundred non-player character dwellers of Booezor.  They should break down into mostly correct amounts of each race and class.  Obviously wizards are over represented as this is the famed city of riches and magic.

Booezor Individual NPC Table (d100)
01 Dammaddeus, M goboda bard, a storyteller, folk artist, adventurer, and guide, he is friendly and trustworthy, plays the Bwamanna, a hollow, resin-treated gourd instrument and was a companion of (14) Mikayla Lemsteeg in her First Assessment.
02 Syrib Gohoni, myconid wizard, an exile who grew bitter and selfish barred from the collective, talks too much, loves itself, and leads a delving group reported to be highly antagonistic to others.
03 Huo Daoh, M iele monk, a tall soft-voiced man from the archipelagoes with huge eyes and hands, he seems dispassionate in his dealings with people, but comes alive battling a beast for its animal style.
04 Kriskree Taragasth, M fasinaa fighter, a wealthy game hunter with countless trophies from the Vash and the Faakshidraa, he now plans new safaris in the ridgewaste and the Cnacociel area to the east, no “lazy noble” he is the first into the fray every time.
05 Jimbuk Joekpo, M umash wizard, an elderly evoker specialized in arts of fire, lightning, and sand, covered in the scars of allowing his own spells to “touch” him out of respect.
06 Dictyla, F chrichoral wizard, an incredibly pragmatic and conscientous bounty hunter, she specializes in conjuring and altering animals to track and subdue her marks, if sleep and charm don't work.
07 Ashimari, F iele wizard, a mid-rank archaeologist of the Children, she has no time for anything but her work, technomagical circuitry.
08 Dilben Djeenen, M iele wizard merchant, a round obsequious and somewhat lecherous mage of little skill, made a fortune crossing the Gragot with a shipment of extremely rare exotic herbs.
09 Xeleen, M fasinaa sorceror, a creepy fellow who speaks in singsong rhyme, collects nature spirits he binds to masks, scarves, bags, bottles, and jewelry.
10 Skokonom, M fasinaa wizard, the master housemage of Shiariis Booezor the most luxurious hotel in Stoneforest, large, exactingly polite and absolutely unfriendly.
11 Korkorabb, M ogre wizard, a 'born' or 'uncursed' ogre of advanced age, a specialist in soul transference and phylacteries, covered in lockets and bangles.
12 Dugaah, M mororca fighter, one of the few of his kind to come so far from the Gragot, somewhat runty but clever, he commissioned custom armor and throwing weapons and became a feared mercenary. 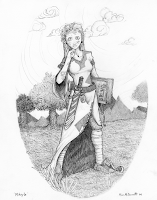 41 Suzarne Starfelt, M iele fighter/wizard, a hollow eyed man past the peak of his life, both his gloves bear grip-breaking blades, he wields a iron and silver sledge to wreak some kind of vengeance against xiphids like (18) Sol.
42 Linulas Ziigrad, M fasinaa artist, an expensive but expert scribe capable of reproducing nearly anything he sees, in a city of scribes his value is greatly enhanced by his inability to remember his works after a day or so.
43 Eventually Urenstz, M iele merchant, a man with truly liquid charm who rose to wealth on the back of his word, his claim has been he can provide you with any good you might desire... eventually.
44 Samazel Dwine, M goboda fighter, a thug employed for intimidations beatings and murder, a fearsome friendless jagged-scaled fellow who nevertheless donates most of his hard won coin to orphanages.
45 Griscole Taethe, M fasinaa merchant, a wide blunt- faced butcher with a useless left eye, popular for his wide selection of meats he is also rumored to dispose of the bodies of people for a good price.
46 Second Son, M iele fighter, a taciturn spear wielder born here in the city, when he was a babe his father forced him to swallow a chunk of black iron so that his elder brother would inherit the magic meant for him, to this day he resists magic and possesses abilities to disrupt it.
47 Shram Gambo, M wumpus merchant, a short jagged-toothed creature like a gremlin with a two tufts of colored fur around his skinny neck, sells bird whistles, other animal calls, and many small items of unknown use, claims alternately to be an exotic or from the depths, swears he's never been to Soec.
48 Yayoida Amzu, F iele priest, a pantheon priestess who preaches lessons of community and the intersection of the divine powers, from the Temple of Shared Graces in Waspnest she is a popular arbiter of disputes.
49 Bokorn Sledgeface, M iele barbarian, a huge man whose skin erupts in keratinous growths, he is originally from a village far in the ridgewaste where his tribe of iele arise, leaves little flakes of horn everywhere.
50 Utrigga Denthk, F iele merchant, the stressed but always efficient manager of an aerial transportation service run on the power of giant insects and flying animals, even resting briefly at a tavern she will be surrounded by a knot of pilots and handlers demanding her attention.
51 The Black Fool, demon, a black clad clown with a morose and fatalistic manner, it speaks true nonsense to those who will hear it and is seen everywhere by those who fear, it knows the way to Ig.
52 Omen Wilbanner, F iele wizard, a self-described Familiarist and owner of Wilbanner's Menagerie in central Cindiband, she has three teenage children who deal with the day to day operations of the zoo and a husband who acquires rare animals.
53 Face-of-Lore, F iele priest, a woman buried beneath multiple masks and robes, a worshipper of Naudde who deals in secrets and dreams, her deepest secrets may require you to find her far beneath the city.
54 Salvencieme Moai, F iele monk/barbarian, once a feral child raised by beasts in the northeast the first other iele she saw she killed with her pack as prey, years and a journey of spirit later and she has achieved a balance between predator and person.
55 Greencup, F goboda wizard, a biomancer specializing in plantlife who lives in a broken stump of a tower commonly called Cup's Hanging Garden, she is incredibly shy and will only converse openly about vegetative matters.
56 Darling Meecha, F mororca merchant, a kind sisterly creature who exudes the pheremonal menace of a predator, she runs a bare bones boarding house and shops in Fruitbasket each afternoon.
57 One, myconid monk, an exile who left the collective in search of solitary meditation, speaks little, its unique fungus style cannot be copied by other races.
58 Moon Eyes, F iele wizard, a cerulean-skinned man with eyes of solid silver color, often in a deep hood with an eye on the front, few have the will to meet his gaze.
59 Nurande, F iele priest, a tremendously tall and gaunt woman wearing a many-layered white and black cloak, an adherent of Ris found in the Crumbling Temple where she silently tends to the mourners and the vacant devotees of the Unmother of Ends.
60 Vane Poulain, M iele rogue, a man whose skin always seems to refect the color of the sky, he claims to be one of the bastard grandchildren of Se'vensaera and glides through difficulties with a smirk, carries a deadly silver short sword with an edge no wider than a blade of grass.
61 Ba Fo Lus, F iele shaman, a spiritdancer who helps to hold the delicate balance of the city and the spirit- filled wilds, she relocates the young confused spirits trapped in the city and tends to the ones who belong.
62 Lemon Lebon, F fasinaa priest, a Liar of Tsugumi with striking yellow-patterned scales, she offers her 'sweet' lemons to those who doubt her conviction as she spreads the words of the Mouth of Poison.

Perhaps specific NPCs are not what you crave and a simple race and class/profession table is what you really need.  I've brought one of those as well. 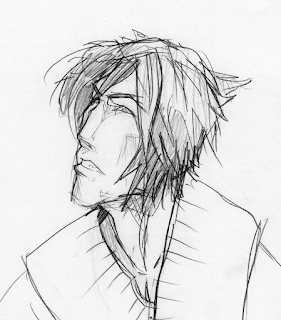 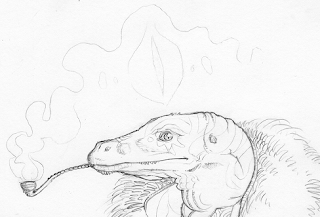 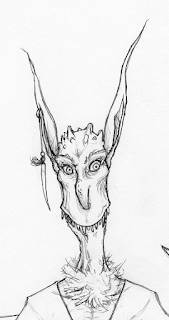 This I think concludes the necessary "pre-dungeon work" let the dungeon work begin... next time maps and monsters?  Hmm, if I ever lose my mind completely and decide to design an rpg, Maps & Monsters is the name.