Fasinaa - The Fasinaa lizard men tend to be tall, thin, and finely scaled.  Their snouts are long, with a monitor lizard or therapod dinosaur type appearance, and full of sharp teeth.  Males have long, thin tails and can be brightly colored, females have shorter, thicker tails and have a camouflaged pattern useful in the last place they shed their skin.

Highly intelligent, agile, and inscrutable, the Fasinaa are known to be hunters, alchemists, sorcerers, assassins, and 'Liars of Tsugumi' (a kind of holy person).  The weakest and smallest of the three saurian species, but the most rounded and adaptable.  Fasinaa are not true "lizard" men, their metabolism is bird-like.  They are omnivorous, eating fruits, roots, birds, and various game. 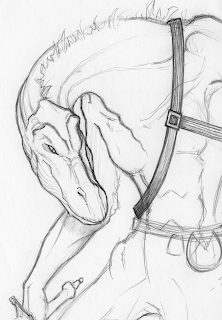 Theirs is the oldest culture in the continent, they are said to have invented writing.  They live in the jungles of the Faakshidraa but many leave to seek their fortunes elsewhere.  All the cities have Fasinaa populations, and they are found in every profession (no class restrictions).  They speak their own language, which has a common root with the other two saurian languages.

In combat, Fasinaa favor spears, javelins, bows, jagged maces, and oversized machetes called Fasinaa Cleavers.  Their wizards speaks to the spirits who live in the ancient trees, deal with the demons who bubble up from the earth or drip down from the stars, and bind the magic animals of the jungle with trickery.  The Faakshidraa is filled with poisonous/venomous animals and plants and the Fasinaa use the essences of every one they can.  Tsugumi Mouth of Poison is their primary goddess.  Her masked devout the Liars describe the world as it is not to give it new shapes (and makes their lives better).
Posted by Orobolus at 3:10 PM