The Shem are the single non-playable sentient race.  They are a shared problem among the surface races, a rallying point and a communal enemy.  Just some sketches this time.  I like the configuration of the Shem's bodies in this one, I'll spare you the hideous original concept of years ago.  Three races remain undefined: the Umash, the Crichoral, and the Mororca saurians.


Shem - The thrumming terror from beyond the mountains, the Shem are a species of flying insectoid slavers that use their natural poisons and strange magics to abduct other races across the continent and return them to Shemna Island.  Trapped on Shemna Island, the captives of the Shem are forced into slave labor, bearing heavy loads, waiting on their masters, excavating in mines and ruins, and constructing great monuments.  They are feared by every surface race, and only the largest, most heavily guarded cities are completely safe from their aerial raids.  Those who have suffered the effects of the Shem's venom and escaped capture will never wish to engage the creatures again, and no one has escaped enslavement on Shemna Island.
The Shem have a wasp-like body, longer than a man’s, covered in gray and blue patterned skin, with a ten-foot prehensile tail tipped with venom injecting stinger.  Though they have the look of a giant insect, the Shem have no carapace or chitin, they are supported internally by lattices of cartilage. The psychoactive venom in the tail stinger inspires fear, respect, and passivity towards the Shem in those stung.  There are four veined, iridescent wings at the back of the thorax, the longest of which is ten feet.  Four child sized multi-jointed arms are arrayed at the front of the thorax, too small and fine to wield any weapon, but capable of using wands, rings, and other small magical items.  The Shem have V-shaped heads at the end of a jointed neck, seemingly featureless but for two huge, many-layered eyes at each end.  They seem to consume nothing, but are said to drink up reflected sunlight monthly at their Crystal Colony in Kao Shem, their bizarre slave made city-structure, far away on Shemna Island. 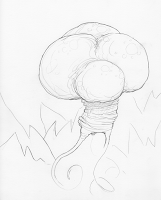 These creatures speak by vibrating their four tiny, non-flight wings on their upper back against vibrations from the flight wings.  The Shem’s whispering, buzzing "voices" twist and dopple, instilling fear and confusion in intelligent beings, regardless of which language they choose to communicate in.  This effect adds to the potency of their psychoactive venom and vice versa.  The Shem are highly intelligent, and highly cooperative, they rely on ambushes and surprise to attack, assist and protect their wounded, and utilize multiple formations in different situations.

Two Shem can comfortably carry an grown man with their prehensile tails, but will leave themselves defenseless.  They prefer to employ other creatures that they have enslaved to do their bearing.  Raiding groups will often be accompanied by one or more floating Bloat Cages, their stretchy mouth bags collared off at the back to keep them from swallowing their cargo.  The Bloat Cages are suspended by bags of buoyant gas, they are found naturally near the Cnacol Peninsula.  At other times the Shem will be in contact with a ground troop of ruined slave creatures, poisoned and abused into depraved monsters, or supported by other, more actively dangerous aerial slaves.

The Shem, like all cultures in the Furthest Lands, have their own disciplines of magic, unique to them and difficult (but never impossible) for others to adopt.  They are said to *still* possess one part of the Seven Sign First Magic, but it is unclear what its use is.  They are known to venerate an aspect of Tyrant  they call the Crystal Sovereign, who bestows incredible powers of domination upon their priestesses, the Shem Icons.
Posted by Orobolus at 12:51 PM