The Foabeléth Ordirrex, my megadungeon, begins beneath the city of Booezor with six minor dungeons as entrances.  This is a diagram of their levels, features and connections.  Each square on the outline indicates a dungeon map (level one of the sewer is three maps large), each line a connection between maps, and each numbered node a "feature".  Beyond this diagram the minor dungeons eventually connect and continue downward for at least five more levels.
I'd like to fully write up and map the first level of each minor dungeon.  If I can accomplish that I'll see how I feel about the remaining levels, but it isn't exactly my aim to detail this whole megadungeon.  I've got a list of around fifty monsters to be illustrated and stated. 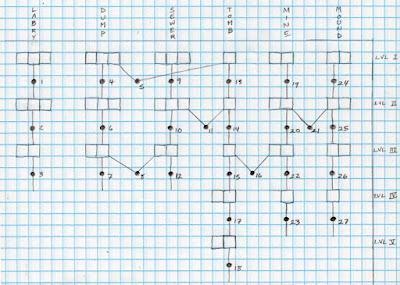 Labrynthyne (3 levels) – a quasi-extradimensional prison structure built to contain magic users. It is filled with creatures that ignore, twist, or feed on magic energies, convicts too dangerous (or hated) to kill, and beings from other planes.
(levels are randomly generated each time it is entered, connections to other areas are random)
1  Astral Passage – permanent connection to the astral plane (lvl 1).
2  The Parasite Ship – an illithid living ship from Quiddath is anchored to this reality here (lvl 2).
3  Nexus – an area of repeatedly folded space, potentially connects to various other points in the megadungeon (lvl 3).

Filth Pits / Refuse Dump (3 levels) – the size of small town and with a population of people to match, the city's dumping grounds have become their own multi-leveled ecosystem and cave complex, eventually meeting the sewers or the twin underground helical rivers.
4  Trash Town – village of monstrous freaks and lepers (lvl 1).
5  The Corpsegrounds – junction of Dump and Tomb, dumping place for bodies of the lowest class citizens (lvl 1).
6  Rusted Reef – an ecology built around the rusted hulks of ancient machinery (lvl 2).
7 Grunglegon the Glutton Wyrm's Lair – the largest and maddest of the Glutton Wyrms makes its home here (lvl 3).
8  Sludgefalls – junction of Sewer and Dump, empties into Xeeres river which winds down to the underground sea (lvl 3).

Oldcity Sewer System (3 levels) – the functional and nonfunctional sewer systems of several iterations of the city built on top of each other. A huge mess of tunnels and chutes that spans more than twice the length of the city.
9  Sluicedweller Shafts – home to the Fasinaa Sluicedwellers, the descendants of uncivil marsh dwellers whose reactions to outsiders vary (lvl 1).
10 Oldcity Ruins – here the sewer empties through the collapsed and moldering ruins of the oldcity and creates a fetid underground lake (lvl 2).
11 Flooded Halls – junction of Sewer and Tomb, waters from the sewers flood into the tomb passages here, half-filling the halls (lvl 2).
8  Sludgefalls – junction of Sewer and Dump, empties into Xeeres river which winds down to the underground sea (lvl 3).
12 Ekkaslurem the Cistern Wyrm's Lair – the oldest of the Cistern Wyrms and god of the Troggers makes its home here (lvl 3).

Tomb of Mountain's Heart (5 levels) – its earliest parts were dug deep into the heart of the Sculpted Mountain, and the subsequent generational levels were stacked on top of each other one after another as the city grew. It occupies little horizontal space but a great deal of vertical space.
5  The Corpsegrounds – junction of Dump and Tomb, dumping place for bodies of the lowest class citizens (lvl 1).
13 Necropolis I – the city of the dead frequented by the living mournful (lvl 1).
11 Flooded Halls – junction of Sewer and Tomb, waters from the sewers flood into the tomb passages here, half-filling the halls (lvl 2).
14 Shrine of Ris – a massive silent temple to Ris the goddess of entropy (lvl 2).
16 Sleeping Fossil Veins – junction of Tomb and Mine, the resting place of innumerable ancient creatures, their remains pressed together into undead chimera (lvl 3).
15 Necropolis II – the true city of the dead, only frequented by them (lvl 3).
17 Bone Pentagrammetricon – a great unholy device, a powerful altar for interacting with spirits of the dead (lvl 4).
18 Lich Queen's Throne – one of the elder rulers of Booezor holds her wraith court in the deepest part of the tombs (lvl 5).


Moonmetal Mine (4 levels) – silver IS magic in the “Furthest Lands”, not a currency. Occasionally silver or Moonmetal will rain down from the sky as meteorites. The most closely guarded mine on the lower slopes of Booezor's Sculpted Mountain was once a steady source of the magical metal.
19 Abandoned Shafts – the worked and emptied shafts that bore earlier lodes (lvl 1).
20 The Crystal Gallery – a tremendous crystal-lined cavern (lvl 2).
21 The Overreach (Contested Zone) – junction of Mound and Mine, a battlefield in the war between man and termite (lvl 2).
22 Active Veins – active silver veins (lvl 3).
16 Sleeping Fossil Veins – junction of Tomb and Mine, the resting place of innumerable ancient creatures, their remains pressed together into undead chimera (lvl 3).
23 Corrupted Meteorite – the resting place of an ancient meteorite filled with daemantine, dormant Metal Demons (lvl 4).

Giant Termite Mound (4 levels) – a great nest of giant termites at the base of the sculpted mountain is believed to connect to the deeper parts of the megadungeon.
24 The Sunken Tower – a mage's tower, long fallen into ruin and half swallowed by the mound (lvl 1).
25 Fungus Gardens – vast areas of fungal growth tended by the termites (lvl 2).
21 The Overreach (Contested Zone) – junction of Mound and Mine, a battlefield in the ceaseless war between man and termite (lvl 2).
26 Thliffuthand the Titan's Lair – a colossal beast like a great anteater makes its home here, it is one of the Nine Titans scattered across the continent (lvl 3).
27 Royal Chambers – the primary termite queen's area of the mound (lvl 4).