5/6 of the entry minor dungeon encounter tables for the Foabeléth Ordirrex, the megadungeon beneath Booezor.  Previous tables here, here, here, and over here.  Nearly there now, the next and last one is the Moonmetal Mine, which is more construct and humanoid-centric. 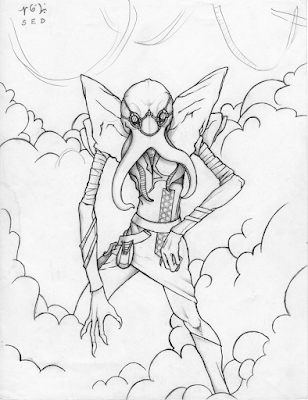 The Labrynthyne
1. Xeazeon – energy being and trap for magically talented souls, a small crystalline polygon, transparent but glowing from within, surrounded by three or more powerful wizard spirits bound into an incandescent lattice, multicasts and resists many magics. 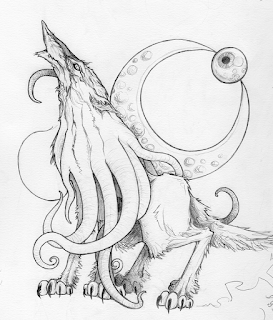 2. Labrynthyne Tracker/Courser – biomagical constructs created to track and harry those who are trapped here, like sleek plastic dogs, they smell individual magical signatures and disable their targets at the throat and wrists.
3. Skoshola – hulking blue-grey quadrupedal beast larger in the front, like a huge bear with a cluster of fleshy petals for a head and a great mouth bisecting its chest, they seek to eat magic users above all else.
4. Dreamer – what appear to be some sort of fetal creatures, each physically different, blissfully asleep inside iridescent bubbles, they are near indestructible observational presences from another world and warp reality around their positions.
5. World Sphinx – woman and beast on a great scale, an oracle and executioner in one who reads magical fortunes with the Seeing Cards that can maim and kill.
6. Flying Eye – “evil eye” monsters, small and rapid in their chiropteran flight, they have various gaze attacks depending on their iris color.
7. Gremlin – living metamagical distortions with a dangerous and annoying sense of humor.

8. Mind Thief – a great floating mass of tentacles, jointed mouthparts, and innumerable eyes, attached to a bloated sack of a body covered with foot-long lumps, the lumps are the stolen brains of spellcasters which make the creature the natural opponent to the illithid races.
9. Ethwuu – tiny tube-snouted, armless creature, flies on the lazy flapping of several “petals” of skin around its neck, sips the magic from enchanted items and lasting spells with its hummingbird tongue.
10. Wizard Convict – powerful learned magic prodigy, dangerous or disruptive enough to the city to be banished here.
11. Census Objex Warden – special heavily outfitted member of the city's “magical authority”, generally here to interrogate or retrieve an important exile, always accompanied by two or more Coursers (2) .
12. Warder Magarchitect – master transmuter here to repair or reinforce the physical and intangible structures that make the Labrynthyne, always accompanied by several Lamellar Worms (28), necessary for the work.
13. Sorceror Convict – powerful natural magical talent inherited from ancient sorcerous bloodlines, dangerous or disruptive enough to the city to be banished here.
14. Illithid – squid-headed, wasted-bodied beings from a world called Quiddath, accidentally connected to the Labrynthyne, they possess powerful magical and mental powers and excel in bioengineering. 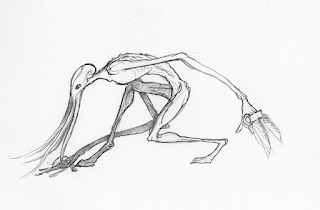 15. Lyrathid – illithid stock heavily bioengineered into psionic stealth operatives who move and kill with boneless grace, sometimes armed with living weapons.
16. Zegrathid – illithid stock heavily bioengineered into psionic hyperphysical destroyers, their bodies plated with chitin and their facial tentacles overlarge, sometimes armed with living weapons.
17. Extra-Material Butterflies – hyper-real, near incandescent, blue, green and pink, more existent than visitors to this place and capable of softly flapping a cauterized hole through their bodies as if they were smoke.
18. Sword Arcana – made by the Census Objex, living magic glyph in the sign of the sword, bears destruction magics, succumbs to restoration magics. 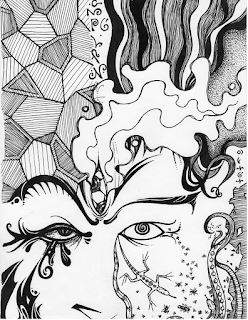 19. Slavecrown Spider – magical arachnid with a concave body shaped like a helmet or crown, attaches to a person's head and dominates them.
20. Environmental Encounter (1d4)
1. Dead Magic Zone – area of nullified magical effects, local wildlife avoids these places.
2. Portal – leading to a random potentially and probably lethal alternate reality, a lower vibrational plane, or an elemental plane.
3. Warped Magic Zone – area of chaotic magical effects, some local wildlife are attracted here.
4. Quiddath Incursion – reality's fabric is weak here, and the Illithid dimension of Quiddath forces itself through altering even the laws of physics. 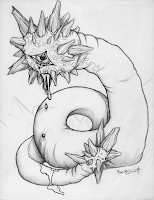 26. Astral Child – giant fat and glittering opalescent infant, it has wandered into this psuedo-plane and rages with its incredibly hard skin and strength of twenty men with closed eyes.
27. Grail Arcana – made by the Census Objex, living magic glyph in the sign of the grail, bears change magics, succumbs to abjuration magics.
28. Lamellar Worm – iridescent annelids from whose byproducts the structure of the Labrynthyne are woven, non-aggressive but capable of breaking down any solid matter to create their building material.
29. (Roll on Adjacent Area Table)
30. Special *